There is a sign for the FIS Alpine Ski World Cup Champions Grove near the bottom of the Ruthie’s Lift on Aspen Mountain. Photos of the sign are below. It features a large photo of Andrea Mead Lawrence, along with smaller photos of Anja Paerson and Franz Klammer. It also lists the FIS World Cup winners, starting in 1950. The sign also states the following:

“Aspen has a storied history of ski racing starting with the Federation Internationale du Ski (FIS) World Alpine Championships in 1950. Aspen hosted its first World Cup in the spring of 1968, attracting considerable attention and prestige, and has since witnessed incredible athletic achievement over the years by champions in all disciplines, both men and women from around the world. Andrea Mead Lawrence (1932-2009) won gold medals in the 1952 Oslo Olympics in both the slalom and giant slalom disciplines. As of 2010, Andrea is still the only US ski racer—male or female—to win two skiing gold medals in the same Olympic Games. Andrea lived in Aspen and trained with US Ski Team Coach and ski pioneer Friedl Pfeifer. Each year a Colorado blue spruce will be planted on behalf of Aspen Winternational winners in honor of Andrea Mead Lawrence. Aspen Skiing Company is proud to have these incredible athletes as part of its skiing heritage. Aspen Winternational”
Photos of this sign are below and following those photos is a copy of an article about it that appeared in the Aspen Times on November 23, 2009.  Also, this item is part of a Facebook photo album that covers various signs and plaques on Aspen Mountain (you do not need to have a Facebook account in order to view the album):  https://www.facebook.com/media/set/?set=a.451981024873867.101778.100001859201674&type=1&l=9577c13e9e
If you have any information about this item that you would like to share for use on this page, please send to the author at AspenShrines@aol.com. 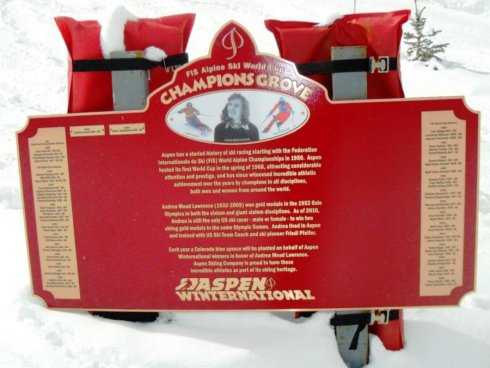 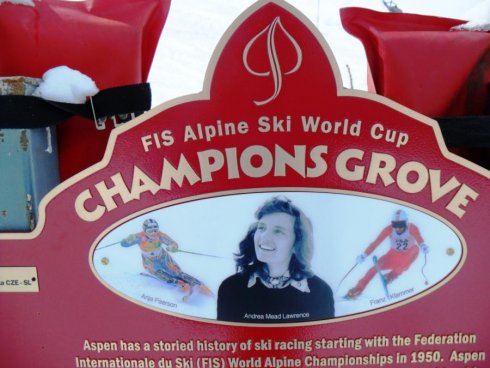 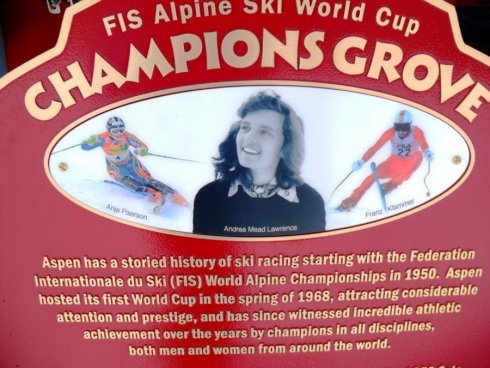 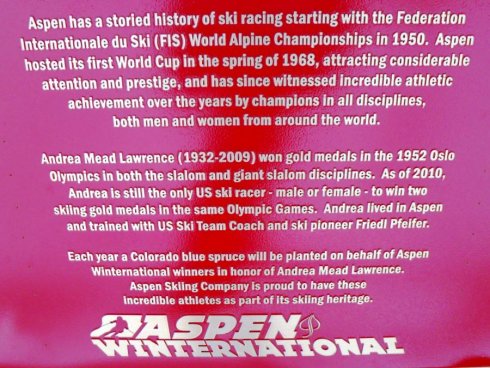 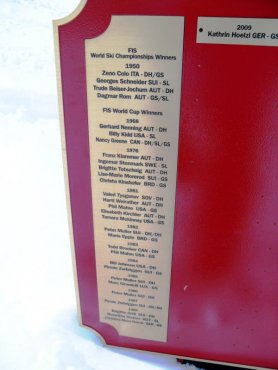 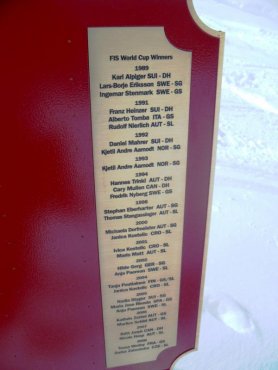 The Aspen Skiing Co. will start a special grove of trees on Aspen Mountain in honor of Andrea Mead Lawrence, an Olympic legend who lived in town during the 1960s. The first new trees planted in the grove will honor the women who win the giant slalom and slalom races on Saturday and Sunday.

“After next weekend it will be two trees, and it will grow from there,” said John Rigney, Skico vice president of sales and events.

Traditionally, the winner of the longest race at Winternational — in this year's case, the giant slalom — gets her name on the Bingham Cup. But the award is somewhat obscure for all but the most intense race fans after the event is over. The Winternational organizers wanted something more visible.

“We bounced through hundreds of ideas and kept coming back to the environment,” Rigney said. The creation of a Colorado blue spruce grove was selected because it matches the Skico's ideals and creates a cool monument to the racers. “It's a legacy, and they can be proud,” he said.

The grove will be started on the skier's left on lower Norway, on the Lift 1A side of Aspen Mountain, according to Nancy Scheinkman, who is helping organize Winternational. The grove will be just below a timing shack along the World Cup course, visible from the grandstand at the base of course. Existing blue spruce are nearby, giving organizers confidence that planted trees will flourish. The racers' trees will actually be planted sometime next growing season rather than during the winter.

The grove is meant to be a long-term monument to the racers, which demonstrates the Skico's commitment to hosting World Cup races, Rigney said.

It also honors Mead Lawrence because of her accomplishments in alpine ski racing, environmental activism and for the town of Aspen. She won two gold medals in alpine skiing in the 1952 Olympics in Norway. No other American has matched that feat.

Mead Lawrence was a remarkable skier who competed in the 1948 Olympics in St. Moritz, Switzerland, when she was just 15. She raced in Aspen in the FIS World Championships in 1950.

In the 1952 Olympics, she won the giant slalom medal but achieved legendary status for her performance in the slalom. She fell on her first run but salvaged a fourth position. Her second run — the race combines times on the runs — was regarded as perfect. She offset her deficit and won.

Mead Lawrence moved to Aspen with her husband and three children in the early 1960s, and she got involved in civic endeavors. She served on the Aspen Planning and Zoning Commission and helped elevate the ski club to a new level.

Later that decade she left Aspen and eventually moved to Mammoth Lakes, Calif., where she was known for her conservation efforts in the eastern Sierra Nevada mountains. She died of cancer in March.

Her daughter Didi Lawrence, a Roaring Fork Valley resident, said she is thrilled with the tribute to her mother.

“I was totally honored, and she would be, too,” Lawrence said by phone while working on the World Cup course on Friday.

Her mom loved her time in Aspen, and she was also beloved in town, Lawrence said. She was part of a generation that helped create the resorts and the outdoor, mountain lifestyle that continues to attract so many people to places like Aspen.

“Part of my mom's spirit is in the mountains,” Lawrence said.

And the presence of her spirit on Aspen Mountain will be enhanced with the creation of the “World Cup Champions Grove in honor of Andrea Mead Lawrence.”