Sneaky's Tavern was located in the Capitol Peak Lodge in the Base Village area of Snowmass. It opened in November of 2008 and closed in April 2013 at the end of the ski season.  It was named after, and a memorial of sorts, dedicated to Jim "Sneaky" Snobble.  He was the first mountain manager of Snowmass, retired from his job with the Aspen Skiing Company in 1984, and died in December 2006.  A painting of him hung on the wall just inside the entrance; see photos of this painting below.  A room at the back of the tavern was named "Sneaky's Cabin."  For another item related to Snobble, see this page on this site:
Sneak's Inn: http://www.aspensnowmassshrines.com/index.php?70-Sneaks-Inn-Snowmass
Snobble's obituary is at the bottom of this page, following the photos. Also following the photos is an article about the tavern that appeared in the October 18, 2008 issue of the Aspen Times newspaper.  Also, see this Aspen Times article of April 30, 2013 about the closure of the restaurant:  http://www.aspentimes.com/news/snowmass/6260269-113/related-space-base-sneaky.  Also see below for a photo of a pin that was given away when the tavern opened in 2008.  At the start of the 2013-14 ski season "Ricard Brasserie and Liquor Bar" opened in the space previously occupied by Sneaky's Tavern; see  http://www.aspentimes.com/news/8260857-113/goodell-restaurants-chef-bar.
Photos of the tavern and the painting are below. If you have any information about this item that you would like to share for use on this page, please send to the author at AspenShrines@aol.com. 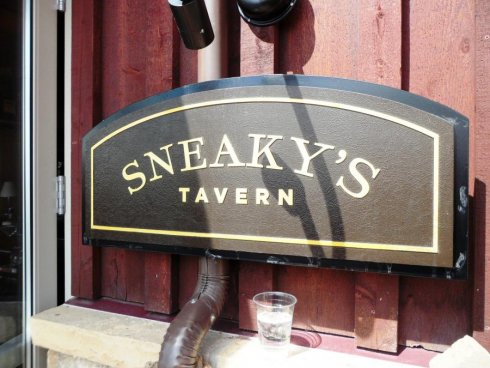 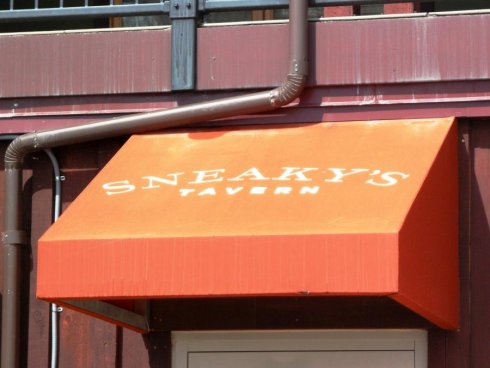 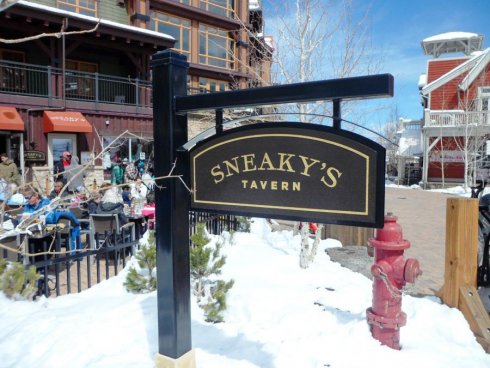 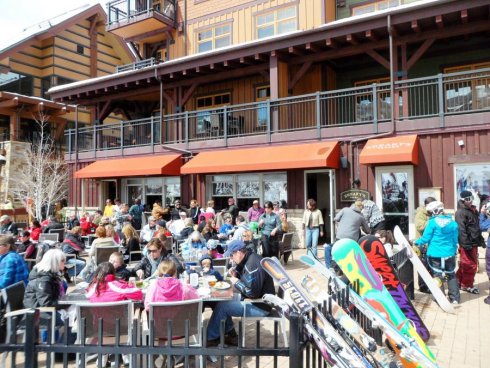 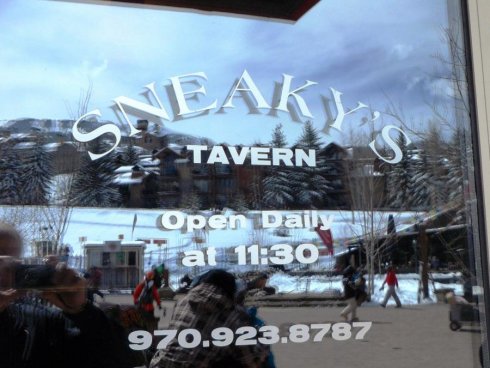 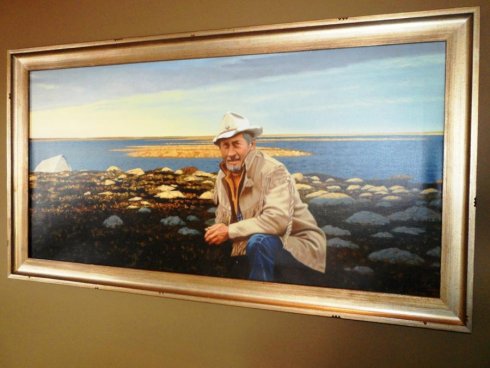 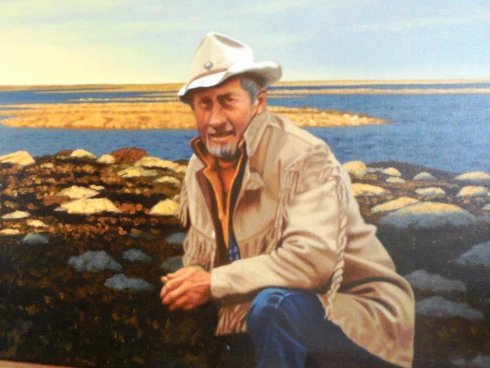 Jim was born Feb. 8, 1919, in South Haven, Mich., but spent most of his childhood and youth on Chicago's North Shore. He graduated from Highland Park High School in June of 1937, and graduated from Washington and Lee University with a bachelor of arts degree in geology in June of 1941.

Following graduation, Jim joined the U.S. Navy. Following successful completion of the Officers Candidate Training Program at Cornell University, he was assigned to the backwaters of the Port Director's Office in Cristobal, an Atlantic terminal port near the Panama Canal.

After training at the Naval Amphibious Training Base in Norfolk and Little Creek, Va., he assisted the precommissioning activities for the launching of the attack transport USS Shelby (APA-105), to which he was later assigned.

The Shelby was immediately ordered to the South Pacific and Jim participated in the battle of Okinawa and in landings during the initial occupation of Japan on the southern Japanese island of Kyushu.

Following World War II, Jim came to Colorado and worked in sales for Bond Crown and Cork Corporation, a division of Continental Can Corporation. He made his way to Aspen in 1947, and shortly thereafter settled in Aspen.

In addition to his sales work, Jim became a member of the "old" Aspen Ski School in 1950. When a full-time job opportunity arose in the Aspen Skiing Company, he turned his attention to the challenge of initiating and completing the planning and feasibility studies for the proposed Snowmass Ski Area. In this capacity, he developed lasting friendships with such people as Art Bowls, Darcy Brown, Jesse Caparrella, Tom Marshall, Bill Mencimer, Hal Hartman, Tom Richardson and Don Rayburn.

Jim served as vice president and area manager of the Snowmass Ski Area from 1967 until his retirement in June of 1984.

He spent nearly all his vacation time taking solo canoe trips into Canada's arctic Northwest Territories. The remoteness of the arctic, the thrill of canoeing and the wolves he observed left an indelible mark in his heart. Upon retirement he frequently traveled north to canoe, and from his home in Snowmass Village, pursed his passions of skiing, backpacking, fly fishing and golfing.

Jim is survived by his daughter, Heidi Johnson, of Concord, N.H.

Snobble was invoked, in part, because he was instrumental in establishing Snowmass as a family resort — and the roughly 200-seat restaurant will make a point of catering to families. As a nod to locals, another important constituency, pub passes guaranteeing $3 drafts will be provided to premiere ski pass holders.

Big-screen televisions, a huge outdoor brick patio, a lounge area, two fireplaces and an indoor-outdoor bar are designed to provide atmosphere. At the back, a private room named “Sneaky’s Cabin” — meant to evoke Snobble’s secret cabin, hidden on the ski hill for locals to use until it burned — can be closed off with barn doors.

Chefs Tico Starr, formerly of Sage Restaurant, and Ed Curtindale, formerly of Pacifica Seafood & Raw Bar, have yet to finalize the menu. For now, they describe the food as “American bistro-style” and say it will likely include items such as warm chocolate cake, macaroni ‘n’ cheese, burgers, short ribs, braised lamb shank stew and a “signature” steak.

Serving lunch, après and dinner, the restaurant is scheduled to open on Thanksgiving." http://www.aspentimes.com/article/20081018/ASPENWEEKLY/810179927

These pins were given away when Sneaky's Tavern opened in 2008. 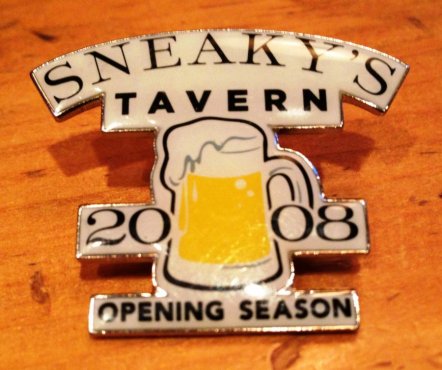