"Sanctuaries in the Snow--The Shrines and Memorials of Aspen/Snowmass"  is a book about the shrines and memorials of Aspen/Snowmass, based on the material on this website.  It was written by David Wood, who can be reached at [email protected].  It is the first and only book about the shrines of Aspen/Snowmass.  The book author's two motivations in writing the book are:  1.)  The shrines are a part of the interesting ski history of Aspen/Snowmass and the author wanted to do something to help preserve, catalogue, and document that history, and 2.)  Raising money for a worthy charity in the Roaring Fork Valley.  The author makes no profit on the book personally--all author profits go to the scholarship fund mentioned on this page.  The book is a soft-cover book, and it details 51 of the principal shrines and memorials of Aspen/Snowmass.  It is 79 pages long, measures 7" X 7" square, and contains over 225 high quality color photographs.  A photograph of the front cover of the book is shown below.  The book would make a good addition to your library, or to give as a gift.

You may purchase the book on-line by sending a payment of $24 via PayPal to [email protected]. Include your name and mailing address.  That price includes shipping to anywhere in the USA.  (For shipping outside the USA, send $30.)

If you are in the Aspen/Snowmass area, the book is for sale at several locations:

In Aspen at Aspen Eclectic at 635 E. Cooper Avenue in the Aspen Square building and next door to the Poppycocks restaurant.

In Aspen at Clark's Market at 300 Puppy Smith Street.

All author profits from the sale of this book are donated to the Roaring Fork Valley/ Trashmasters Scholarship Fund.  This Scholarship Fund is dedicated to providing young men and women in Colorado's Roaring Fork Valley with the opportunity to realize their educational goals and dreams.  It is the largest source of scholarship funding in the Valley.  Since 1993 it has awarded over $2,000,000 in college scholarships to high school graduates from Aspen to Glenwood Springs, Colorado.   As of 2019, college scholarships have been granted to 83 young men and women, and 68 have graduated, while 15 students are presently attending college.  For more information, see: https://trashmasters.com/about

The author attended a successful book-signing event at the Aspen Historical Society in December 2009.

The book received a favorable review in an article in the Snowmass Sun newspaper of Wednesday, December 23, 2009 by Madeleine Osberger, Sun Staff Writer; the title of the article is "Shrines revealed in ‘Sanctuaries in the Snow'."

The book also received a favorable review in the January 2010 issue of SKIING magazine.  The title of the article is "Aspen's Secret Shrines, In Pictures," and it is by Jake Bogoch.  See:  https://www.skimag.com/adventure/aspens-secret-shrines-in-pictures

In January 2010 PLUM TV Channel 16 in Aspen did a feature on the book.

On February 5, 2010 PLUM TV Channel 16 in Aspen aired a short interview with the author regarding the book.

The March 7, 2010 issue of the Denver Post newspaper contained an article about the book, written by Bill Husted ("Off the beaten mountain paths but dear to fans of dearly departed.")  See:  http://www.denverpost.com/husted/ci_14526778

The book is mentioned in an article in Colorado AvidGolfer magazine, "Visiting the Woods" by Jake Kubié, May 2010, page 24.

The author attended a successful book-signing event hosted by People's Press at the Woody Creek Community Center on August 7, 2010.

The author attended a successful book-signing event at the Aspen Historical Society in December 2010.

Michael Conniff stated, "There is even 'Sanctuaries in the Snow: The Shrines and Memorials of Aspen/Snowmass,' a book that is said to sell well in the Roaring Fork Valley" in a December 2010 article on Aspen Post.

The book received a favorable review in an article in the Saturday, November 26, 2011 issue of the Aspen Times, "Book shares secrets of Aspen's ski area shrines," by Scott Condon.  This article also appeared in the Denver Post; see http://www.denverpost.com/dontmiss/ci_19516162.

The author attended a successful book-signing event at the Aspen Historical Society in December 2011.

During the week of December 2-8, 2011 the book was listed in the Aspen Daily News "Time Out" section as the #1 book on Explore Booksellers list of the top 10 bestselling books. See this link: http://www.aspendailynews.com/section/entertainment/150484.  In subsequent weeks it was consistently ranked in the top 10.

On March 22, 2012, the author appeared on Marilyn Gleason's show "Valley Voices" on KDNK radio, to talk about the Aspen/Snowmass Shrines and the book.

The author attended a successful book-signing event hosted by the Aspen Historical Society in December 2012.

The author attended a successful book-signing event hosted by the Aspen Historical Society in December 2013.

My book is called "the definitive book on the subject" in an article in the November 2015 issue of the United Airlines Hemispheres magazine. The article is "Three Perfect Days Colorado Rockies" by Sam Polcer.    Click this link and scroll down to page 72:  https://www.aspenchamber.org/sites/default/files/files/3pd-nov15.pdf?fbclid=IwAR3Kl5p5UgHrIYcSLi4uODb_fxPNRsLKG5aM-mO0X7r7stUyl2TqOPB9x6c   For more information on this United Airlines article, see this Facebook photo album (you do not need to have a Facebook account in order to view the album):  https://www.facebook.com/media/set/?set=a.954468921291739.1073742035.100001859201674&type=1&l=2c0cd12e63 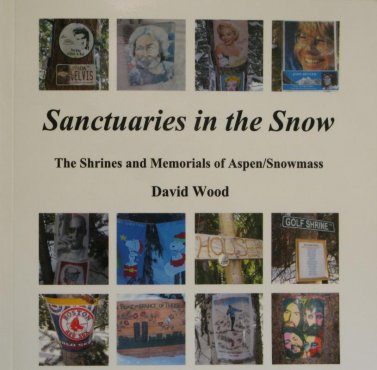