Friedl Pfeifer helped to build Aspen as a ski resort after WWII.  He was one of the founders of the Aspen Ski Corporation, the Aspen Ski School, and Buttermilk Mountain.  A native of St. Anton Austria, Pfeifer had learned to ski race and teach from the famous Hannes Schnieder, but WWII drove him first to Australia and then to the United States where he trained the U.S. Women’s ski team and eventually ran the ski schools at Sun Valley and later in Aspen.

During WWII, Pfeifer became a member of the Tenth Mtn. Division.  Pfeifer often came to Aspen on maneuvers and weekend furloughs while training at nearby Camp Hale.  Vowing to return after the war to pursue his dream of making Aspen into a world-class ski resort, Pfeifer arrived on October 16, 1945 with his discharge papers in hand, along with his purple heart and a few dollars.  He founded Aspen's first ski school and managed to convince Walter Paepcke to invest in the building of Aspen's first chair lift.  For more information on Pfeifer, see this Aspen Daily News article, "Friedl's fire: The Lift One origin story"  https://www.aspendailynews.com/news/friedls-fire-the-lift-one-origin-story/article_a466f3e2-6056-11e8-ade3-c36ba8e5364f.html

An inscription on the base of the statue indicates that the statue was sculpted in 1999 by sculptor Sam Fadhli.  He is from Loveland, Colorado, his full name is Hussam Abbas Fadhli, and he is a surgeon and horse breeder.  A photo of him is below.  His web site stated the following as of March 2010:  "Sam Fadhli is an award winning sculptor who has been creating magic in bronze since 1985.  He is a Fellow of the American Artists Professional League, a member of Allied Artists of America, Academic Artists Association and National Sculpture Society.  His experience as a surgeon and horse breeder gave him a unique perspective from which he creates his art.  His sculptures celebrate in bronze the most noble of creatures, Man and the Horse."  For much more information on him, see his web site:  http://www.fadhliarts.com/artist.php

The Friedl Pfeifer statue is in the Gondola Square at the base of Aspen Mountain.  Photos of the statue and the plaque are below.

This statue and plaque is covered in the book, "Sanctuaries in the Snow--The Shrines and Memorials of Aspen/Snowmass."  The book may be purchased on this page on this site:  http://www.aspensnowmassshrines.com/index.php?The-Book 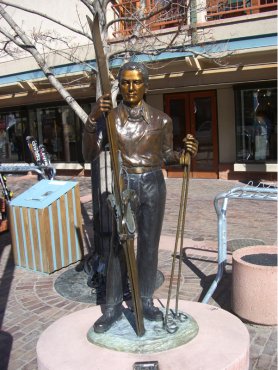 This photo shows the statue after the original plaque went missing. 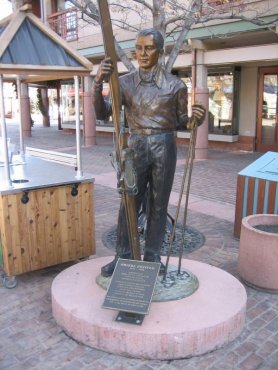 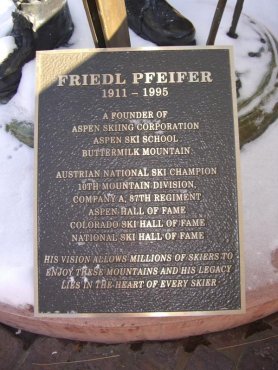 The new plaque at base of statue. 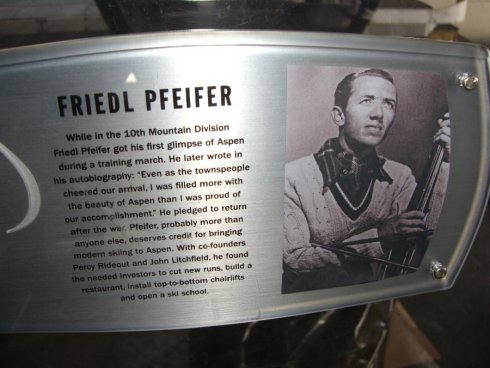 This plaque is affixed inside 2 of the 174 Snow Queen gondola cabins at Aspen. 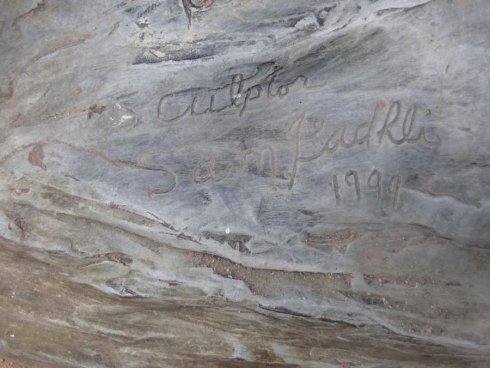 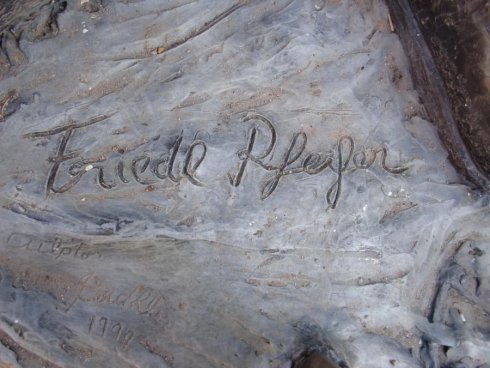 His name is engraved on the base. 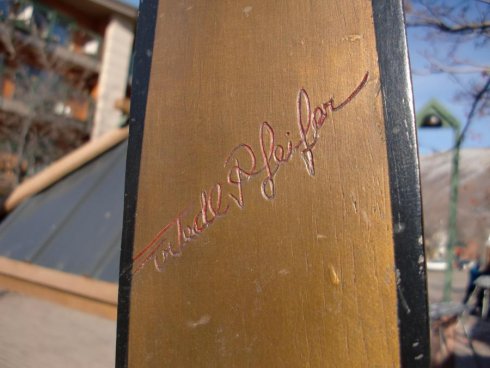 His name is engraved on the tip of the skis. 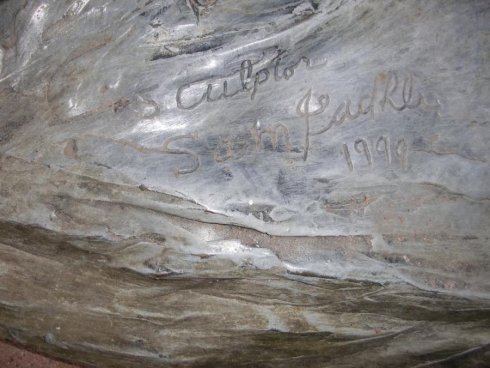 Austrian native Friedl Pfeifer, a member of the U.S. Army’s 10th Mountain Division began training near Leadville at Camp Hale in 1941. He had been teaching skiing at Sun Valley. While on furlough, he skied Aspen Mountain. He vowed that after the war was over, he would return and develop Aspen into a world-class ski resort. After the war, Pfeifer relocated to Aspen and began buying up mining claims and surface rights.

This life-sized bronze statue of Friedl Pfeifer is located in Gondola Square, near the Little Nell Gondola at Aspen Mountain Ski Resort. The statue stands upon a circular concrete base, just shy of 1 foot high. It depicts Friedl standing, holding his skis in his right hand and his poles in his left. The bindings on the skis appear to be for cross country skiing. While I'm sure that his clothing is of that worn in his day, it certainly is not the matching ski parka and pants common today. He is shown as wearing long pants, a sweater over a collared shirt, with the collar outside the sweater. The shirt and sweater are tucked into his pants and he's wearing a belt with a rectangular buckle. He appears to be wearing cross country style boots. No sunglasses or ski gloves for this champion skier.

The photos in the section below were taken in May of 2020.  Friedl appears to be wearing a COVID-19 face mask (which were required to be worn in Aspen around that time). 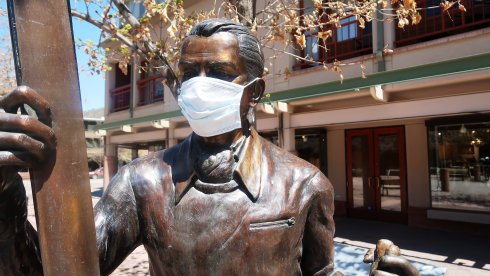 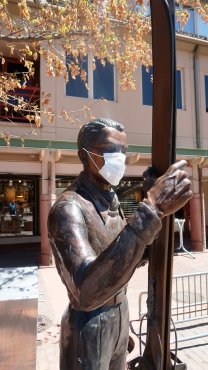 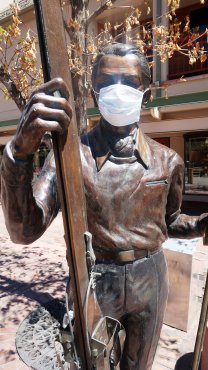 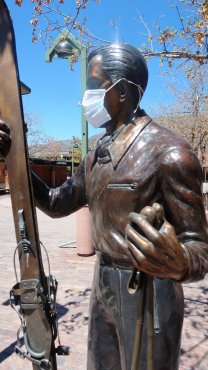